With over a million living species on earth, students cannot ignore the vast diversity of living things. In elementary and middle school, they can enjoy their curiosity about nature and explore the many different organisms in many different capacities. It is in high school that an explanation for the diversity in living things itself must come to light.

Understanding evolution is the key to understanding diversity. And natural selection, being the mechanism (or cause) of evolution must also be understood. Though students may understand evolutionary change and how it works in a general sense, they need to broaden their thinking from the specifics of individuals with certain traits to how the traits in a whole population can change.

This lesson is an introduction to natural selection.

The Motivation introduces a species of bird that became (over millions of years) numerous species, through adaptation. The Development is a hands-on activity that demonstrates how populations change little by little, generation by generation, due to survival of species that have traits that are beneficial in an environment. Students will learn why organisms evolve over time, how natural selection works, and how certain factors determine survival and differences in organisms. This hands-on activity is probably more effective than any reading students will do on the subject, particularly if the subject is new.

Also, the lesson deals with natural selection itself. It does not bring up the discovery of natural selection or its discoverer, Charles Darwin. You may want to plan this lesson, however, in coincidence with such information.

''........can we doubt (remembering that many more individuals are born than can possible survive) that individuals having any advantage, however slight, over others, would have the best chance of surviving and procreating their kind? On the other hand, we may feel sure that any variation in the least injurious would be rigidly destroyed. This preservation of favourable variations and the rejection of injurious variations, I call Natural Selection'

or in a most concise definition from contemporary Biologist Richard Dawkins: "the non-random survival of random variants."

The link below leads to an activity that can be used to demonstrate natural selection:
Bean activity
Action: Online Simulation
Natural Selection Interactive: http://phet.colorado.edu/en/simulation/natural-selection 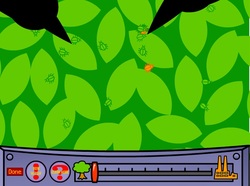 Article about the adaptation of Finches 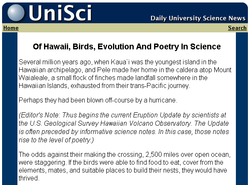 The article, without much detail, tells the story of one species of finch that came to the island of Kaua'i several million years ago. It describes how the one population adapted over millions of years to the food and habitat.

The following discussion questions will help you determine what your students know about adaptation. It is a commonly misunderstood concept (see above). If students cannot answer the questions, that is fine. This situation could even prove to be better because it means you are starting with a clean slate. If they answer them incorrectly, the development should address any misunderstandings.

Above is a recommended article from the UniSci site that focuses on another aspect of adaptation. The article not only covers how animals have adapted to a habitat, but how the successful survival of the animals can in turn impact the habitat