The term evolution refers to the cumulative change that occurs in populations of organisms over time. Sometimes evolutionary change is so dramatic that different populations of the same species diverge to become two or more distinct species. In the case of a group of birds called honeycreepers, for example, a single species that colonized the Hawaiʻian Islands about 5 million years ago ultimately diverged into 57 different species.

This process, which evolutionary biologists call speciation or adaptive radiation, can happen anywhere. However, it is most clearly demonstrated on geologically young land masses, such as newly formed islands or mountains. In these environments a population of organisms will typically find a set of environmental opportunities and pressures very different from the conditions they experienced in their place of origin. These environmental differences come in many forms and often cause sweeping evolutionary changes in a founding population.

Another factor that can influence speciation is predation. Predators typically reduce the rate of speciation because they limit other organisms' access to resources. On newly formed land masses, however, the number of predators is typically lower than on older continents. These younger environments, therefore, provide more opportunities for species to evolve into new and different species.

...is an evolutionary process in which one species divides into two because the original homogenous population has become separated and both groups diverge from each other.

In their separate niches, the two groups go their own evolutionary ways, accumulating different gene mutations , being subjected to different selective pressures, experiencing different historical events, finally becoming incapable of interbreeding should they ever come together again. For many years this has been regarded as the main process by which new species arise.

Often this type of speciation occurs in three steps. First, the populations become physically separated, often by a long, slow geological process like an uplift of land, the movement of a glacier, or formation of a body of water. Next, the separated populations diverge, through changes in mating tactics or use of their habitat. Third, they become reproductively separated such that they cannot interbreed and exchange genes.

Under normal conditions, genes in a given population are exchanged through breeding, so that even if some variation occurs, it is limited by this "gene flow." But gene flow is interrupted if the population becomes divided into two groups. One way this happens is by "vicariance," geographical change that can be slow or rapid.

Genetic drift can cause big losses of genetic variation for small populations.

A founder effect occurs when a new colony is started by a few members of the original population. This small population size means that the colony may have:

For example, the Afrikaner population of Dutch settlers in South Africa is descended mainly from a few colonists. Today, the Afrikaner population has an unusually high frequency of the gene that causes Huntington's disease, because those original Dutch colonists just happened to carry that gene with unusually high frequency. This effect is easy to recognize in genetic diseases, but of course, the frequencies of all sorts of genes are affected by founder events. 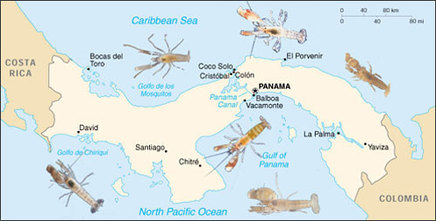 Have your students view the image to the right.

This is an example of vicariance; the separation of marine creatures on either side of Central America when the Isthmus of Panama closed about 3 million years ago, creating a land bridge between North and South America. Nancy Knowlton of the Smithsonian Tropical Research Institute in Panama has been studying this geological event and its effects on populations of snapping shrimp. She and her colleagues found that shrimp on one side of the isthmus appeared almost identical to those on the other side -- having once been members of the same population.

But when she put males and females from different sides of the isthmus together, they snapped aggressively instead of courting. They had become separate species, just as the theory would predict.

Hummingbird Species in the Transitional Zones 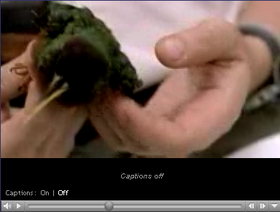 The hummingbird study that Tom Smith and Chris Schneider are conducting in Ecuador is part of a much larger research program spanning three continents. Evolutionary biologists are fanning out and tramping through varying ecosystems in Africa, Australia, and South America, catching and meticulously describing the animals that live there. It's a new venture aimed at answering an old question, one that underlies all of evolutionary science: What drives the formation of new species?

The prevailing theory goes back almost 60 years, to when biologist Ernst Mayr of Harvard University proposed the "reproductive isolation" theory. When a population of, say, lizards or birds becomes divided by geographical barriers, small changes over time will alter the genetic makeup of the separated groups. Eventually, they differ enough that, should they encounter each other again, they can no longer interbreed. The offshoot group has become a new species.

But in recent years an even older, contrasting view dating back to Darwin has been gaining ground. The globe-trotting biologists are discovering an intriguing pattern: In many places, species appear to have emerged at the transition zones between different ecosystems, without ever being geographically cut off from the parent stock. They are examples of how natural selection can act through ecological differences to spawn new species.

The Andean hummingbirds are not an isolated case. The force of ecology has also been studied in the leaf-litter skink, a small lizard found in Australia. Two populations living close to each other but in different ecosystems show in their DNA that they're genetically distinct. Chris Schneider figured out that the two populations had adapted to different ecosystems -- one an open forest and the adjacent one a closed rainforest.

The open forest lizards are smaller, have shorter limbs and bigger heads, and become sexually mature earlier. The reason: Predator birds more easily pick off lizards in the open forest, so the skinks there have evolved to reproduce earlier, generating offspring before they become a bird's dinner. The genetic differences, shaped by selection, have produced two distinct species living next to each other.

And the converse can be true: Populations separated by geography but living in similar environments may be almost indistinguishable. Says Schneider: "Time and isolation alone don't necessarily result in new morphologies -- whereas a new environment does."