Depending on time constraints and how quickly your class is able to learn new material, it would be beneficial to split this topic into three lessons, one for each of the domains of Archaea, Bacteria, and Eukarya.

Domains are the highest taxonomic rank of organisms.  It is also the broadest range of classification for life and also the largest.  Under it falls: kingdom, phylum, class, order, family, genus, species.

Currently in use is the three domain system developed by Carl Woese in 1990.This tree of life consists of three domains: Archaea, Bacteria, and Eukarya.

Before this system was developed, the two-empire system of two superkingdoms was used and it classified life into prokaryota (“before the nucleus”) and eukaryote (“true nucleus”).

As of 2011, there has been scientific talk about having a fourth branch to the domains of life to be the “Nucleocytoplasmic Large DNA Viruses” (NCLDV), which would refer to a number of families of large eukaryotic DNA viruses such as: Asfarviridae, Ascoviridae, Iridoviridae, Marseilleviridae, Mimiviridae, Phycodnavirdae, and Poxviridae.  The debate about whether to include this group or not is that it remains uncertain whether or not the similarities of different families of this group is due to independent recruitment of the same or related host genes during viral duplication, or if they simply share a common viral ancestor. 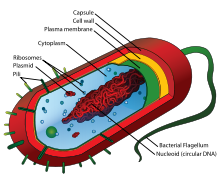 Prokaryotes are a group of organisms whose cells lack a cell nucleus and do not have any membrane-bound organelles.  All of the intra-cellular water-soluble organelles are located together in the same area enclosed by a membrane.

Most prokaryotes are unicellular, thought there are some that are multicellular during some point during their life cycle or they can create large colonies. 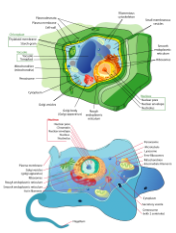 Eukaryotes are organisms whose cells contain complex structures enclosed within membranes.  Most importantly as a distinguishing factor between eukaryotes and prokaryotes is the presence of a nucleus, within which the genetic material is located.  Most eukaryotes can also contain other membrane-bound organelles such as: mitochondira, chloroplasts, and golgi apparatus.

All eukaryotes are within the taxon Eukarya.  Most are complex organisms such as animals, plants, and fungi.  However, this group also contains many unicellular organisms. 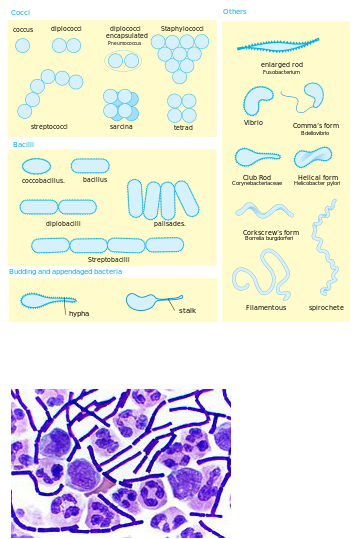 Bacteria were first observed by Antonie van Leeuwenhoek in 1676 using a single-lens microscope.

The name Bacterium was introduced later by Christian Gottfried Ehrenberg in 1828.

Bacteria were among the first life forms to appear on Earth, and are found in most habitats on the planet, include growing in soil, water, acidic hot springs, in the Earth’s crust, and living in and on the bodies of plants and animals. There are approximately five nonillion (5×1030) bacteria on Earth.  They are vital in recycling nutrients, and in playing a key role in biological communities by providing nutrients to other organisms.  Most bacteria have not been characterized yet, and only half of the species can be grown in a laboratory.  The study of bacteria is known as bacteriology, a branch of microbiology.

Bacteria were once thought to be plants, but are now in their own domain of Bacteria.  These are prokaryotic organisms as they do not contain a nucleus, and rarely have membrane-bound organelles.  They have a wide variety of sizes and shapes, ranging from spheres, to rods, to spirals, and rand from – micrometers in length.  A bacterial cell is surrounded by a cell membrane, and most have a cell wall which is vital to their survival.  Generally there is considered to be two main types that are distinguished by cell wall structure: gram-positive and gram-negative.

Unlike multi-cellular organisms, bacteria reproduce through binary fission which is a form of asexual reproduction, where cells grow to a fixe size and then grow divide. Under optimal conditions this can occur extremely quickly, with the possibility of populations doubling every 9.8 minutes.

This refers to organisms whose cells contain complex structures contained within membranes.  The defining feature of this group is the presence of the nucleus, within which genetic material is contained.  Most eukaryotic cells also contain other membrane-bound organelles such as mitochondria, chloroplasts, and golgi apparatus.

Cell division is quite different from organisms without a nucleus, as it involves separating the duplicated chromosomes through movements directed by microtubules.  There are also two types of division processes.  Mitosis occurs when one cell divides to produce two genetically identical cells.  Meiosis is required for sexual reproduction, where one diploid cell undergoes recombination of each pair of parental chromosomes, followed by two stages of cell division to produce four haploid gametes cell, with each of these having a unique mix of corresponding pair of parental chromosomes. 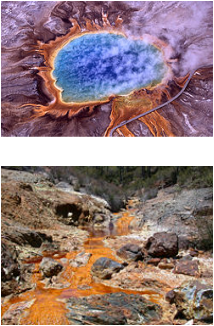 These are single-celled prokaryotic microorganisms.  They have no cell nucleus or any other membrane-bound organelles within their cells.  Originally they were classified with bacteria as prokaryotes due to their visual similarities in size and shape.  However, they have been given their own domain apart from Bacteria, because it has been seen that Archaea have an independent evolutionary history and have many differences in their biochemistry than other forms of life.  They possess genes and several metabolic pathways that are more similar to eukaryotes such as enzymes involved in transcription and translation.  What distinguishes them from eukaryotes is their reliance on ether lipids in their cell membrane and that they use a much greater variety of sources of energy such as ammonia, metal ions, and even hydrogen gas.

These forms of life are extremely difficult to study, making classification difficult.  Most have never been studied in the laboratory, and have only been detected by analysis of their nucleic acids in samples from the environment.

Initially archaea were seen as extremophiles that lived in harsh environments such as hot springs and salt lakes, since then they have been found in number of other habitats such as oceans, soils, marshlands, and the human colon and navel.

HOOK
Images of the three domains.
Discussion of:


ACTION
Difference between prokaryotes and eukaryotes.

Brief discussion on the possibility of adding viruses to our classification of life system we currently have.
If there is time there is a Video on Archaea and their viruses

Introduction to the Kingdoms, to see how they fit within the domains

All images are from wikipedia.org unless otherwise stated.